I caught my first Seatrout on a shrimp fly and I guess that I will catch my last Seatrout on an imitation of a shrimp. But I will guarantee you that it will not be the same shrimp fly that starts and ends my Seatrout fishing career, because in the up till now 20 lovely years that I have fished for saltwater Seatrout I have worked hard to create the perfect shrimp imitation.
With “Pattegrisen” I feel that I am closer than ever before. 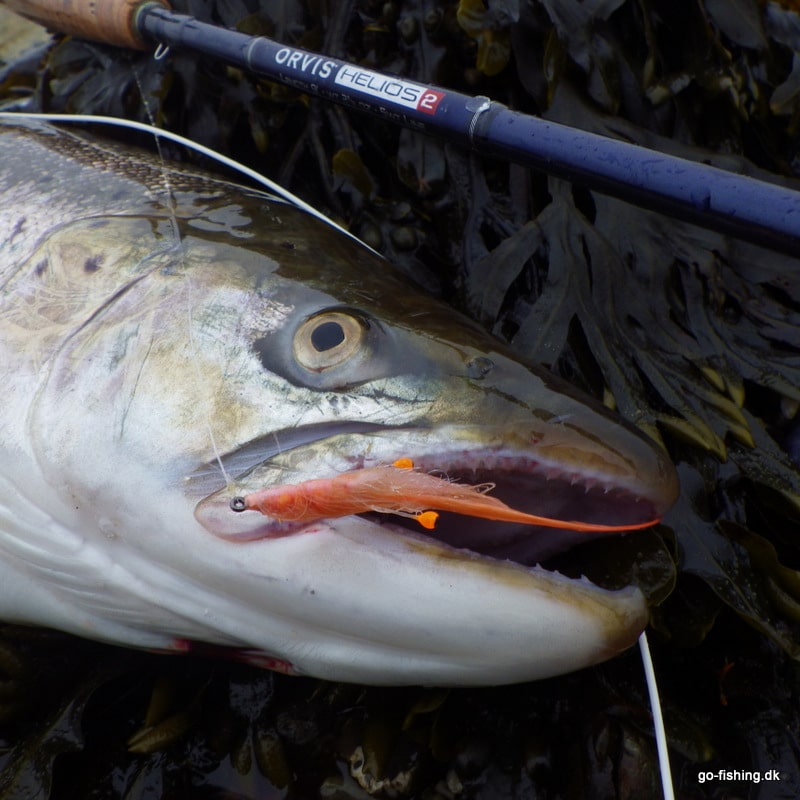 Basically you can find shrimp in the sea all over the world, and all predatory fish love shrimp. The Scandinavian Seatrout is definitely no exception to this rule. They feed on shrimp all year round. I live on Fyn, the island in the middle of Denmark and we are surrounded by sea and shrimp-loving Seatrout. As a matter of fact shrimp constitutes 60-70 % of the food of the coastal Seatrout. That is the reason why a shrimp fly is always worth a try. The local fly fishermen have known this since fly-fishing for saltwater Seatrout really came into fashion almost 30 years ago. Innumerable shrimp flies have come and gone since then. In the beginning the hot flies were primarily simple grey and brown hackle-flies as Red Tag and Magnus. 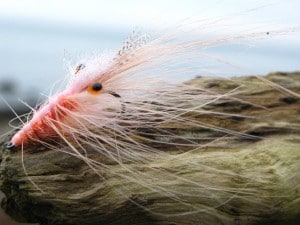 In the nineties we saw a long line of apparently very natural looking shrimp imitations, tied with modern materials like nylon, various plastic materials and epoxy. The problem was that these flies were natural to the human eye only and when the fly was in the hand. When they were in the water, they sank like a stone and had movements that were very far from their natural counterparts.
The Seatrout were not impressed, and many fly fishermen soon returned to the old hackle flies, which looked less than the natural shrimp, but still caught more fish than the synthetic masterpieces.
A very well-known shrimp fly on Fyn, is the Magnus. A grey copy of the Chillimps, you could say. A super simple pattern, which a lot of Seatrout has mistaken for being a shrimp! But even if it worked sometimes, I still had numerous situations where it was not good enough to lure shrimp-eating Seatrout to take the fly.

The weaknesses of the Magnus-fly were several. One point was, that it did not look like a shrimp, but the most important point was that it did not behave like a shrimp in the water. Look at a natural shrimp. It “walks” elegantly through the water with its long legs and antennas. When it stops it does not sink very much, but moves towards the bottom with a seductive glide with the legs and antennas spread out to all sides. When it is scared, it shoots like an arrow through the water with all the tentacles waving behind it. This is the movement I was looking for in my flies, together with the right shrimp-like profile. When you fly-fish for fish that are eating, you can catch on all sorts of flies at times, but we must never underestimate the importance of flies that imitate the natural food of the fish. These flies will always work the best in the long run. A good imitation looks like its natural prototype seen from all angles and at the same time it has the same life and movement in the water. If all these things come together, the imitational flies will catch more fish. Perhaps even a bigger fish, which with the experience from a longer life is not as easily lured as the smaller fish.
>My search, and others with me, continued, and with materials like Ultra Hair, Softex, rubber legs, CDC feathers and the new tying techniques, many new and exciting shrimp flies were found in the beginning of the new millennium, but for me the really big breakthrough came when Whiting in 2005 introduced their incredible Spey hackles.

A Spey hackle is a super soft, long fibred cock hackle that was meant as a substitute for heron hackles for Spey style salmon flies. The Spey hackles are excellent for salmon flies, but for saltwater shrimp imitations, they are superior.

Following a number of experiments with the Spey hackles, the fly “The Pattegris” turned up in my fly-tying vice, and it was a roaring success from the start. Of course it will catch Seatrout in the “easy” months of March and April. That is no surprise. In this period the fishing is easy and most flies can catch a fish or two. What is even more exciting is the success of “The Pattegris” with the bigger, but also far more difficult summer and autumn Seatrout. Here this fly is better than anything else that I have ever tried.
Difficult fish in warn water, that will normally only respond to very small flies (just like salmon in a warm summer river), follow and indiscriminately take even bigger “Pattegris” flies. As a matter of fact, this fly has brought quite a change to my summer fishing. Up to now I only fished in the night during the summer period. In the daylight the Seatrout could be impossible to catch, but “The Pattegris” has turned this situation upside down. With this fly on my leader I have enjoyed tremendous success during the day in the last couple of years, and that even in weather that was too fine and water that was too warm.

The qualities of “The Pattegris” were quick to spread far beyond the borders of Fyn and Denmark. First, other Danish and Scandinavian saltwater fly fishermen began using this fly, and also German anglers started using it with good results.
In the summer of 2008 it proved to be extremely good for sea-bass from the Italian Mediterranean to the Oslo Fjord in Norway. Also in the same summer it was introduced in many salmon rivers, and it proved effective from the Danish river Skjern, and the big Gaula in Norway, to the river Ranga in Iceland. I had good results with it tied on a size 3/0 hook for Belize Tarpon and later I tied it on a tube for steelhead in the Skeena system in British Columbia with good effect.
The effectiveness of “The Pattegris” for migratory fish in rivers has not been tested enough yet, but I am very confident that the coming salmon season will show “The Pattegris” as a serious alternative as an excellent salmon and Seatrout fly for running water. 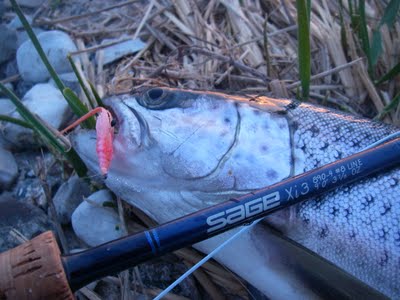 This is my version of “The Pattegris” tied for Seatrout in saltwater.

There is nothing on “The Pattegris” that is casual. The choice of material and the way the fly looks is something that has been developed after countless tests and experiments. Let me explain about the most important elements.

I have deliberately not specified any colour in the description of the pattern. Shrimp come in many different colours, from light pinkish white over grey and sand to olive. All the colours inside this colour spectre are of interest to us. My own favourite colour is a light pink – this is the colour that baptized the fly as it is the colour of a newborn little pig.
In our fly-tying language this colour is called salmon or shrimp pink. This colour has the right balance between high visibility and natural looks. For cold or coloured water I sometime go to the extreme and tie “The Pattegris” in more bright colours and with more flash in the dressing than I normally use.

HOOK.
The choice of hook is very personal and also decided by the place you will be using the fly and the type of fishing you will be doing. My first “Pattegris” was tied on a Partridge CS 54 size 4 and that hook is still an excellent choice. In the last couple of years I have started using Stinger hooks like Scierra Saltwater Trout or Gamakatsu SC 15. Both hooks are extremely good and hook fish better than any other hooks I know. For salmon I tie on the Michael Frødin Salar single and double hooks from Partridge. “The Pattegris” is also good to tie as a tube fly.

THE SPEY HACKLE.
This is the absolute crucial element of this fly. There are no substitutes. Big cock hackles are too stiff in the fibres and too dense. And marabou is too floppy and full. CDC feathers have some of the same effect as the Spey hackle, but they are mostly too short in the fibres. If you look at a well tied “Pattegris” from below and a little bit from the rear (a very common angle for the Seatrout to see a fly) , then you can really see the similarity with the natural shrimp. Then look at the fly in the water, how it drifts while all the fibres of the Spey hackle pulsates. Pull the fly quickly and see how the fibres center behind the fly and then spread again when the pull stops. This is perfect.
Use a big Spey Hackle with long fibres for the tail and one a little shorter for the body hackle.

FEELERS / EYES.
Shrimp have long glossy feelers. So a good shrimp-fly has got that as well. The stiff Ultra Hair gives the fly a good glide in the water and the fly moves right when the retrieve stops. The eyes are very visible on natural shrimp, so you should not be afraid to use big visible eyes on your shrimp fly.

BACK.
By changing the back you can dramatically change the behaviour of “The Pattegris” in the water. With a standard back made of EP fibres or similar yarn/fibres you get a fly that will move in upright position in the water. If you change the back to a plastic material (Scudback, Flexibody or similar) the fly will turn round and fish belly up. It does not look right, but it can be an advantage occasionally. A “Pattegris” with a plastic back is for example a favourite fly for bonefish.
I also tie a variation with a back made of foam. This makes the fly work right under the surface, and can be sheer poison in low water and for fish hunting right below the surface.

WEIGHT.
You can weight “The Pattegris” under the dubbing body if you want to. A slight weight will give you a fly that will stretch the leader well when you are making long casts. A heavy weight will damage the fine drift of “The Pattegris” in the water.

If we talk about Seatrout fishing, no, I will be bold enough to make the statement, if we are talking about any shrimp-eating fish in the whole world, then I will warmly recommend you to try a “Pattegris”. I will guarantee you that you will not be disappointed.

How to tie a Pattegris

Here you can find a description of how I tie Pattegrisen. It is not a difficult fly to tie, but it is more time consuming than a lot of other flies, but believe me, it is worth the time and trouble.

The long fibres of the Spey hackles can cause problems, but be patient and make sure that they are free of the body, so they can pulsate in the water. It is important to varnish the back of the fly and use a soft varnish. That makes the durability of the fly increase dramatically.

Tie the fly in two sizes. Size 4 is the standard now and the size most used, but a smaller model (size 8 or 10) can be real poison some days.

Find all the materials to the fly here

Watch how to tie the "Pattegris" I the video below 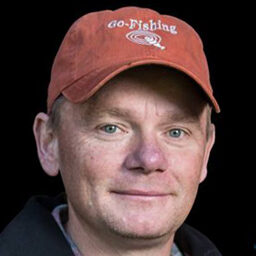